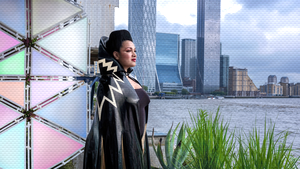 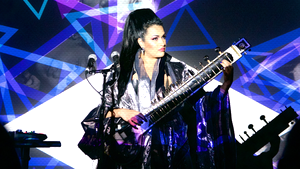 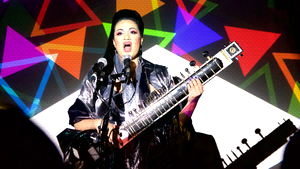 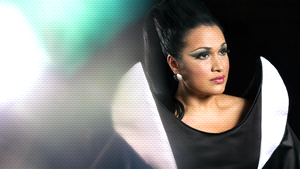 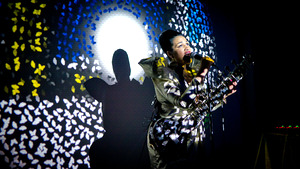 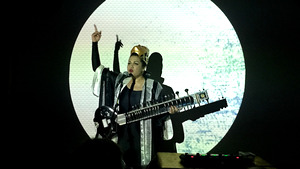 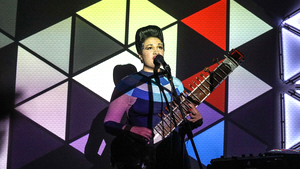 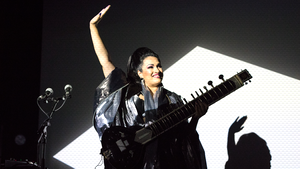 Bishi is a new icon - a sitar virtuoso who creates stunning electronic music that ranges from club to classical, cinematic to operatic in feel, and can glide effortlessly between euphoria and heartbreak. Her standout new album ‘Let My Country Awake’ is compelling and thought-provoking, and was inspired in part by the essay collection ‘The Good Immigrant’ edited by Nikesh Shukla.

Bishi is a composer and curator too. Her collaborations and commissions for the stage have included The London Symphony Orchestra, Yoko Ono’s Meltdown, and The Science Gallery, and she is also the co-founder of WITCiH (Women In Technology Creative Industries Hub).

We asked her about making her new album, which is out now on Gryphon Records. It was launched at the Purcell Room at the South Bank in London, and she is now touring.

Bishi’s new album, ‘Let My Country Awake’ is an absolute masterpiece - in turn spine-tingling, heartbreaking, groove-laden and euphoric. The compelling electronic classical album explores immigrant identity, and at times cuts to the core yet is always full of beauty.

Bishi co-produced the album and plays all the instruments on the dazzling tracks, as well as doing the programming. It was originally commissioned by National Sawdust, New York, and her co-producer was composer Jeff Cook.

“Young people of colour our stories can and should be told” we hear in the opening song ‘Language Is An Ocean’, where breath-taking choral sounds develop into an electronic groove complete with Bishi’s trademark sitar.

The track features the writer Nikesh Shukla, and there’s a great video directed by Shruti Ganguly.

We move from the hook-laden ‘Passport Is A Palace’ with its military-style drums underlining the conflict in new identities, to the more contemplative piano-based ‘Teardrops’ and then the dark electro of ‘Shade’. The production is superb, the sound full but with plenty of space for all the elements to shine.

The title, ‘Let My Country Awake,’ is a quote from the Nobel prize winning poet Rabindranath Tagore’s ‘Where The Mind Is Without Fear,’ written before India’s independence. It represents Tagore’s vision of a new and awakened India. Nikesh Shukla’s voice features along with those of writers Darren Chetty and Salena Godden.

“I wanted to make something beautiful, emotional and thought provoking”

We asked Bishi about making her album - the themes, her four-octave voice, her music gear and more.

What did you set out to do with this album

I wanted to make something beautiful, emotional and thought provoking. The album was born out of a residency at National Sawdust, where I was able to write and co-produce in New York and premiere it as a piece for NS’s Ferus festival. This album has also been part inspired by the ground-breaking essay collection, ‘The Good Immigrant’ which urges us to explore our differences, so that we may build more unity and empathy into humanity instead of discriminating or constructing barriers.

It’s remarkable how the songs are both euphoric, moving, and thought-provoking. Have the themes and ideas in the album become more significant since you began composing it?

As a child of two cultures, you are caught in a cultural storm which is both exciting and isolating, as you oscillate between feeling like you belong and then you don’t. ‘The Good Immigrant,’ really explores the dichotomy of pain and privilege of this cultural position, so I connected deeply with it. Globally, I think we are living in a critical time, where our society has become brutally fractured by the current political landscape. The impact of technology has shifted society radically and the operations and ethics of the ‘Big Tech’ companies being called into question. But, the world has been through much darker times and light always prevails, so I remain hopeful.

You have an incredible four octave range which you use to stunning effect on the album. How did you develop your voice to that level?

A combination or studying various techniques and partying hard! Ha! As a child, I was lucky enough to study Indian Hindustani and Western Classical. I discovered Poly Styrene, punk, Yoko Ono as a teenager, alongside Kate Bush which led me to studying in a Bulagarian choir for a while. The pastoral tones of Shirley Collins and Vashti Bunyan have played a major part in my voice development. I’ve also been in a number of bands influenced by bands like Can, Neu and Kraftwerk and was discovered by Matthew Glamorre of Minty founded by the great Leigh Bowery, so performance art plays a major component to my live development.

There’s an album credit for Voice trained by Meredith Monk - what extra work did you do, and how was it training with her?

I was introduced to Meredith Monk in person by composer and curator Nick Hallett. I’ve loved her work since my teens, so it was momentous when she told me she loved my voice on my last album, ‘Albion Voice,’. Training with her comprised of a combination of a trip to a monastery upstate in New York and also to her loft in Tribeca to study some of her voice and choreography techniques. I never in my wildest dreams thought I’d get the chance to hold hands and improvise with her.

You combine many different musical and spoken word elements to such great effect, tell us a bit about your composing process.

I was limited by time and resources for this album, but I believe constraints provide fertile ground for magic to happen. I initially wrote all the choral parts and Sitar parts on a RC-505 Live Loop station and built the synths and piano parts from there on Logic X. Obviously spoken word samples are huge in Hip Hop and grime, but Steve Reich’s ‘Different Trains’ had a massive impact on me growing up so I was inspired by that piece for this album too. I interviewed Nikesh Shukla, Salena Godden and Darren Chetty, all writers from ‘The Good Immigrant’, who gave me their time and insights into their essays and beliefs on race. I then sampled what grabbed me emotionally.

Music gear for the album

Where and how was the album recorded?

I co-produced and recorded the album in the composer and producer Jeff Cook’s studio in Bushwick. Jeff has worked with some extraordinary artists such as Meredith Monk, John Zorn, Brian Chase from the Yeah Yeah Yeahs, Ana Matronic and The Joshua Lightshow to name a few. He’s so punk rock, he refuses to have a website! He’s a bonafide expert on all things music and sound, generous and a wonderful human all around. I couldn’t have asked for more from a co-producer.

What was your go to gear for making the album?

I programmed and recorded all the demos on Logic X on a combination of RC-505 Loopers, Sanjay Rikhi Ram Studio Sitar, SH-201, Arturia Soft Synths. In the studio, we recorded and mixed everything on digital performer in the studio and the Korg MS-20 drove a lot of the bass. Jeff introduced me to the microphone that has changed my life - the Neumann U87 Ai. It’s transformed the way I listen to music and edit myself during the recording process. I even raved about this to producer, Tony Visconti who agreed that it was a good microphone for my voice, as the U87 ai compliments my voice frequencies.

Did you use any unusual or DIY instruments or sounds?

I think the Studio Sitar is the most DIY of this set up. Jeff added a lot of sound design, really like an architect. My patience in exploring sound really deepened during this process. He had a heap of tape loop magazines in his studio that I would flick through in between scrolling through Instagram to learn more about production methods. I’m really obsessed with learning more about how sound is created.

You modified your sitar to make it an electronic rock instrument. Why did you need to do that and what did you have to do to get the sound you wanted?

The electric Sitar was born out of necessity. The Studio Sitar is half the size of the concert Sitar, so it’s perfect for someone who uses the Sitar as a major component of their song writing. Sigur Ros’ sound engineer showed me the AKG pickups perfect for playing live. The Live show is run off Ableton Live and the Ableton Push for its versatility for people who like to combine acoustic & electronic instruments together. After trawling through many tutorial videos on YouTube, I loved the way Ned Rush was demonstrating a set up for live looping. By routing the Sitar through Ableton, it acts as its own monitoring system as well as the ability to control effects and processors in real time. I’m only at the beginning of this creative process, so there is so much more to come from this. I’m exploring how the Mi.Mu glove can interact with the Sitar. Watch this space.

Visuals are a key element in your work, what was the brief with Output Arts for the album, and what did they come up with?

There’s a term ‘Gesamtkunstwerk’, which means a total art work; an artistic creation, as the music dramas of Richard Wagner, that synthesizes the elements of music, drama, spectacle and dance, etc. Artists such as David Bowie, David Byrne, Kate Bush, Grace Jones, Parliament/Funkadelic embody this term as do current artists such as Janelle Monae, FKA Twigs, Bjork and Missy Elliott. I’ve established a wonderful relationship with Output Arts for the last 4 years and I appreciate how methodical they are in their creativity. I drafted a series of visual mood boards, with themes, colours and fonts.

The feel of the performances was much discussed over a number of sessions before we landed on the final visuals together. We were inspired by the current AV live shows of artists such as Flying Lotus, John Hopkins, Squarepusher and Massive Attack. The basis of the triangles, came from one of their earlier AV sculptures called Storm. Jonathan Hogg, half of Output Arts, live codes the visuals in a language called Python, on a programme he created called Flight. The live show comprised of over 400 lines of live code, so I’ve been learning about coding in the process. We combined the psychedelic triangles with lyrics from the album, to deepen the experience of the album for the audience.

VR visuals and WITCiH platform for Womxn in Tech

Bishi has also been creating amazing VR and mixed reality visuals for live streaming using Volta XR recently, and collaborated with them for a live streamed show for Amazon Music. There’s more from her and the Volta team in our feature here.

Ever innovating in music and tech, Bishi founded WITCiH the inclusive platform supporting Womxn in Tech. It’s an online and real world platform for research, creation, performance and networking, and put on a Digital Festival in the Summer featuring artists and music icons such as Laurie Anderson, Ana Matronic, Nemone, Portrait XO and Anil Sebastian, along with specially-commissioned works.

Coming up next for Bishi are a European and UK tour, plus she is headlining the Random String Festival for Coventry, City of Culture. She has created an immersive audio-visual performance on the water that the festival says will bring poetic spectacle, wonder and imagination to Coventry Canal Basin.

Co-produced by Bishi and Jeff Cook