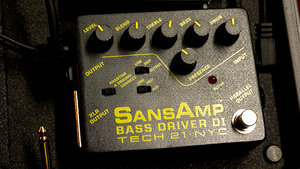 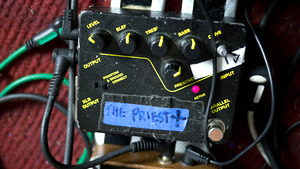 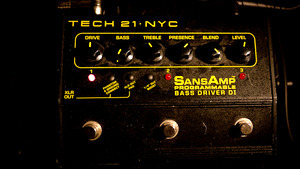 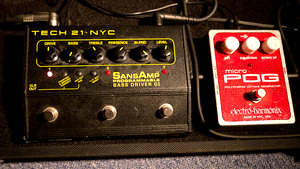 Before the SansAmp, bassists looking for sweet tone could only achieve it by plugging into large amplifiers, which was difficult and at times unreliable - trying to find that ‘sweet spot’ where the combination of mic placement, and driving the amp determined the whole of your sound. In a studio this was fine, but with live shows it became a headache. The SansAmp acts as a preamplifier which models the unique sounds of famous bass rigs, and then allows you to plug direct into the PA desk, mixing desk or power amp. This revolutionary product changed the way people think about plugging direct into the mixing desks at gigs, giving a whole extra level of flexibility and control to the soundman at a show, and ultimately making the band sound better.

It can even be used to plug into an existing amplifier rig to enhance your tone. Capable of dialling up big vintage tube tones, bright modern slap sounds, gnarly distortions and everything in between, this is a versatile preamp. The EQ, Presence, Drive and Blend controls, as well as the three outputs, allow you to control every part of your bass tone, all from a compact pedal. It comes in a three-channel programmable version too.

The Hysterical Injury The top end is really good, really crunches the bass up Read More

Waylayers Key element to my rig, gives you amped up sound Read More